2016: The Year of Suckitude AKA The Prelude to The Elixir

HomeBlog 2016: The Year of Suckitude AKA The Prelude to The Elixir 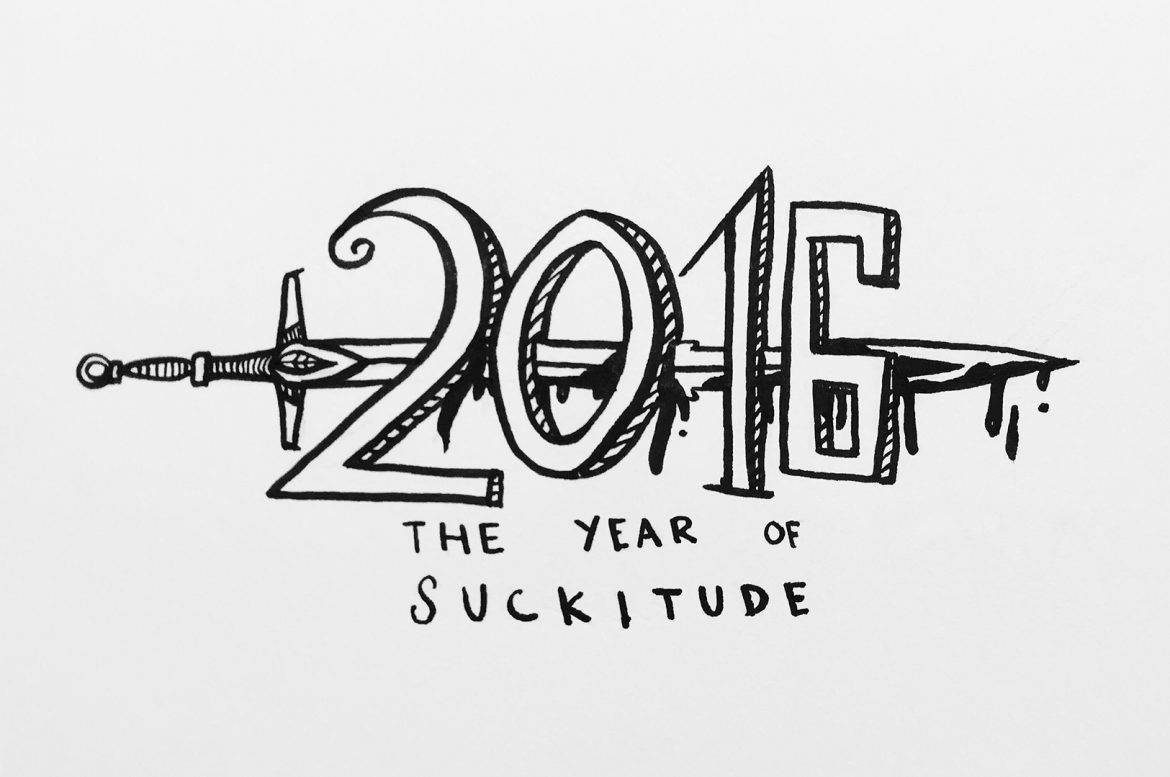 2016 averages as the Year of Suckitude for everyone. There’s so much suck that happened that the good was easily pushed away to the side and was forgotten. But c’mon, it couldn’t have been all bad–sure, the world’s gone insane, but life is really all about the ups and downs we face.

Before the year ends, I’d like to remember all the positive things that 2016 (which voice actor Troy Baker dubbed “an epidemic”) has brought onto my life, because who knows, what if this is just a prelude to the greatest year of the decade? Or maybe the century? Whatever 2017 has in store for us, I pray to the multiverse that it’ll top the bad and recover from the crap the Year of Suckitude has dropped upon us. Besides, 2016 might have been our Resurrection (as Christopher Vogler explained in his book The Writer’s Journey), where “death and darkness get in one last, desperate shot before being finally defeated.” It’s the point in any story where the hero is tested one last time, before charging on with the Elixir to heal the wounded land. And guess what? We’re all heroes here. We just need to remember the positive things in our lives and take the next step to make them even bigger.

Here are events in my life that top the negatives in 2016 and act as preludes to what will make the coming year great:

A lot of good music was released in 2016

We all have our favorite bands and records that made 2016 memorable. If you follow me on the social media machines, you might be aware that I have a strong preference for the heavy stuff, which would explain the lack of mainstream things on here with one going completely left field. So here, may I present my Top 10 Music Things of 2016:

Oh, and there’s this remix Sho did of Ariana Grande’s “Dangerous Woman” y’all should check out (especially if you’re into tasteful guitar solos and pretty mandalas). Do not scroll further without hitting play!

‘Twas THE DREAM to visit Japan, and I actually got to go with Sho and our homies at Terno Recordings to fulfill the ultimate music geek’s itinerary in Tokyo, Sunrise Land. We roamed the streets of Shibuya, Shinjuku, Akihabara, Harajuku, and Ochanomizu (where I gave birth to a Fender Strat named カラス), and went as far as Asakusa to hang with more tourists and some old ladies at a cat cafe.

Here’s a generic photo of Shibuya Crossing from my files:

I’ll be honest and I know this might sound strange, but as a writer, my reading stamina is actually quite pathetic. I prefer getting my stories from video games and comic books, but when my editor Kate Angelella threw a few book recommendations my way in 2015, I found myself hooked on a couple of novels. To be a good writer, you have to be a good reader, and I was determined to level up my writing skills, so I just kept reading.

I picked up a hell lot of books, reading at least 3 a month, and fell in love with two: More Happy Than Not by Adam Silvera and Symptoms of Being Human by Jeff Garvin. Pick ’em up, friends!

I love, love, loooooove comics. A lot of my money ends up going to these booklets of magic, but 2016 is a dick, and forced me to watch my spending, so I reduced the titles I’d normally buy on a weekly basis. Compromising ended up being a lot easier than I’d expected (sorry, Deadpool), but there was one title I never skipped, and that title is Lucifer from Vertigo. I am in love with Lee Garbett’s artwork and Holly Black’s writing (with a special place in my heart for issue #11, because of that adorable flashback).

I have yet to miss an issue, and I have no intention to.

I took some MAJOR leaps in my career as a writer

There are two things I am most grateful for when I look back at 2016–joining the Billboard Philippines Editorial Team as its Senior Writer and signing with Caitie Flum of Liza Dawson Associates. At this point in my life, I can’t see myself doing anything else for a day job than being a music journalist. It’s difficult to find a good writing job where you have the freedom to write about subjects you enjoy and have an awesome team to work and collaborate with. The people I work with are crazy supportive, especially since we all have our own bigger dreams we want to pursue beyond Billboard. And my bigger dream is to be a published YA and Fantasy author. After years of drowning in the query trenches, Caitie picked me up (thanks, Twitter!), and we’re about to get things rolling. Here we come, 2017!

I’ve come to terms with my mental health issues

Speaking of writing, I’m currently working on my second book on mental health, a topic I don’t really talk about out loud, but am very passionate about. People have always perceived me as shy or quiet in the presence of new people, but it isn’t just about me being introverted.

On this season’s Survivor (Millennials vs. Gen X), there’s this gorgeous Gen X-er model named Ken who I rooted for. Towards the end, he opened up about having social anxiety, and the more he talked about it, the less alone I felt. I read up on the topic, relating to numerous stories I came across on the Internet and realizing that that might be what I’ve been dealing with all my life. I’ve since been seeing a therapist to figure out what’s up with my brain, because I realized having a name for what I’m going through makes things lighter, and knowing that many other people out there go through what I do, I’m more determined than ever to write for them.

Paul Yap: 11 Up Dharma Down Songs You Didn’t Know He Wrote