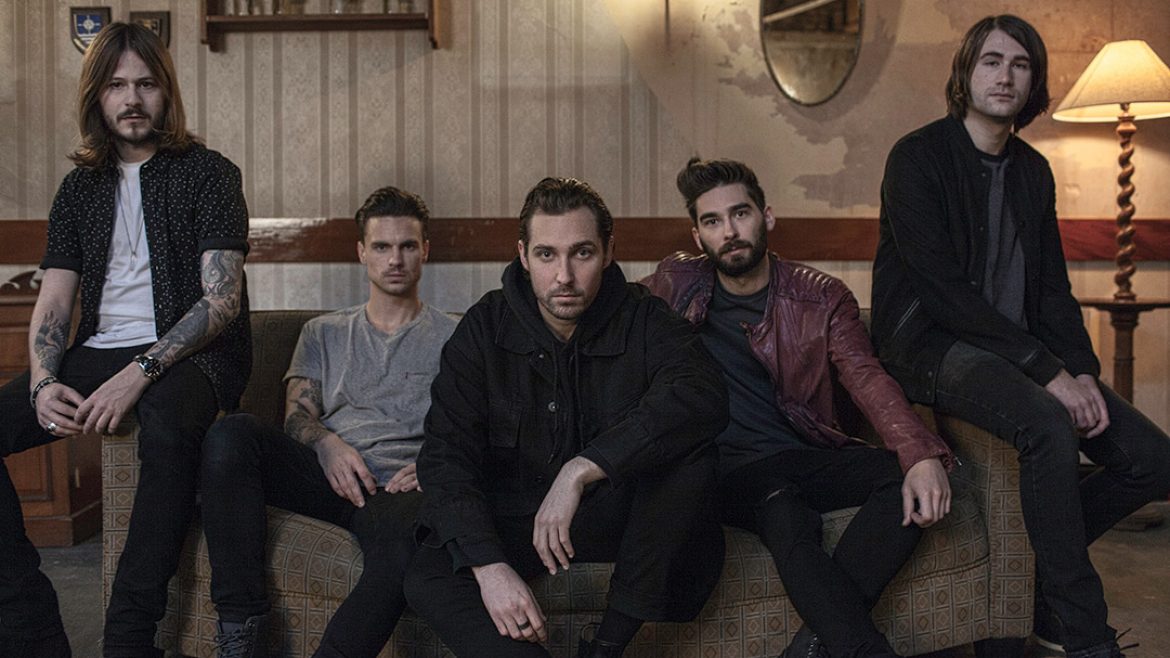 When the words You Me At Six appeared on the screens at PULP Summer Slam 14 as one of the headlining acts for Bazooka Rocks 3, there was a surprising roar of excitement rising from the sea of 30,000 metalheads. As the months rolled in to the end of August for the second day of the punk-rock festival at the SMX Convention Center, those cries got louder and louder until the British band finally took its first steps upon a Philippine stage. They were the most awaited act and they’d been given the closing slot at the 14-hr festival, but fans made their welcome loud and powerful, proving that moshing to nine bands prior was just a warm up to dancing the night away with You Me At Six.

You Me At Six’s fifth studio record Night People features a whole new kind of sound; the lead single/title track packs a solid groove that steers away from anything heard on their previous offering Cavalier Youth, which the “Lived A Lie” band had been promoting when they headlined Bazooka Rocks 3 with The Used and Taking Back Sunday.

Night People is set for release on January 6th, just a few months before You Me At Six take on the road again for their next tour. Guitarist Max Helyer spoke with BillboardPH to talk about their forthcoming record and possible plans to visit the Philippines again.

We’re very excited for Night People, and absolutely dig what you’ve done with its title track. Can you share with us the themes of your latest album and what fans can expect to hear?
We tried to write in different ways on this record, to create a sound and a vibe we haven’t done before. I think songs like “Night People,” you can really hear that in, from the synths that keep the song moving to this classic rock/blues guitar bass feel all over the song. That was the intention when writing this one. As a whole record we just wanted to have a body of work that really felt like a journey.

The last time you were in the Philippines to headline Bazooka Rocks, you were touring Cavalier Youth. Tell us, what’s kept you busy besides writing the new record?
Well, we were touring the world with Cavalier Youth all the way until summer of 2015, then we started writing for this record straight away at Dan, our drummer’s, studio. From there we wanted to take some time making this record, seeing as we have never really had time to stop over the 10 years we have been going.

Who did you work with on Night People? Where did you record the album?
We worked with Jacquire King (Kings of Leon, James Bay, Tom Waits) at Black Bird Studios in Nashville, Tennessee. Jacquire produced and recorded the album, and then we had Andrew Scheps (Red Hot Chilli Peppers, Black Sabbath, Jay Z) mix the record for us. We were stoked when these people start coming to the table and working on this record as they’re some of the best of the best.

The album’s title track packs a new sound — something heavier, groovier compared to Cavalier Youth. What inspired the change in sound?
I think the vibe of “Night People” came from the riff that starts the song off, it was a bass groove that Matt came up with and it had this bluesy kind of feel to it, once we took it to the guitar it went from that blues feel to almost something The White Stripes would have done. We also wanted to incorporate an electronical bed for the song to sit on, so it keeps the bounce of the song moving, this has come from us listening to hip hop and rap music, where there’s something always making the song groove.

What bands and records have you been listening to while working on Night People? Would you say they made an impact on your songwriting?
Personally myself I have tried to listen to all the music I can to get inspiration from anywhere. On this record I really digged into the back catalogue of classic music, anywhere from Led Zeppelin to the who all the way up to current day music such as Radiohead and Foo Fighters. Jack White for me as a guitar player was an influence, I wanted to try and recreate some moments on the record like The White Stripes and have some really aggressive sounds that were qwerky.

Looking back at 2016, what would say were the band’s biggest highlights?
I think making this new record with Jacquire and Andrew, recording it at Blackbird is just something not all artists get to do. Definitely something we will always remember for life.

What are your plans for the coming year?
The release of Night People is January 6th so we will be promoting that all across the world. From there we will be constantly touring this year, there will be festivals as well which we are excited for.

Is there anything new you’ve been working on outside You Me At Six?
The last few years we have really focused on You Me At Six, now the record is done, maybe there are things around the corner. I keep getting told I’ve got the energy for radio presenting, so maybe I’ll give that a try.

Any chance of seeing another collaboration with Oliver Sykes or perhaps with Architects in the future?
If it feels right to do so then we will, we don’t go, “we want to collaborate with someone” and write a song. It comes down to “does the song feel like it needs someone new there or does it feel naturally right going that way?” Personally, I would love to collaborate with someone like Childish Gambino or J. Cole. Someone that people wouldn’t expect us to work with.

With your busy schedule, are you still able to go out and see shows of other bands locally?
It’s sometimes hard to see live acts now these days, but I’m always on the hunt for new bands and music, it’s great to see new talent come through with a new sound. At the moment I’ve been listening to a band called The Amazons from the UK, who are great, also an artist called Rag’N’Bone Man who’s just pure groove.

Are there any plans of returning to the Philippines soon?
We are definitely going to be coming back on this cycle, it could be towards the end of this year or start of 2018.

Do you have a message for your Filipino audience?
Can’t wait to get back and play for you guys again, and enjoy Night People when it’s released 6th January 2017.

2016: The Year of Suckitude AKA The Prelude to The Elixir