Gabbi Buencamino on Self-Publishing Her Poetry Book ‘When Words Fall’ 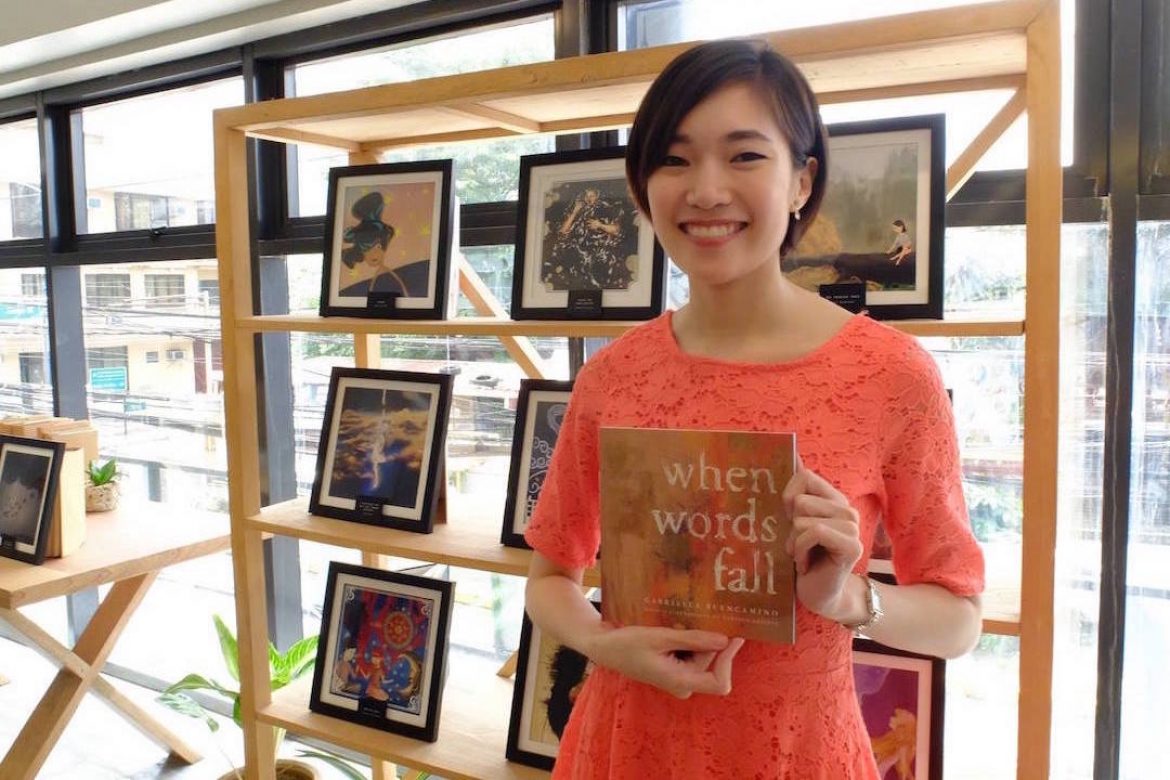 Whatever you create—whether it be a visual piece, a dance, or a limerick—a little bit of your soul becomes a part of it. You dedicate hours of effort to your piece, loving it more and more as you go. And when it’s complete, you reach a point where many aspiring artists take a sudden halt. This is the first test any artist must face—hiding away to watch your stars fade or baring your true self to the world. This is where Moonwlk singer Gabbi Buencamino took a leap for the latter through her music and now with her debut poetry book When Words Fall.

When Words Fall is a collection of poems Buencamino once kept to herself for half a decade, featuring illustrations by artists who interpreted her work into their pieces. Released into the wild through self-publishing, When Words Fall will definitely have something all readers could relate to. While traveling Europe, Gabbi Buencamino spoke with BillboardPH about her first book, the struggles of being a self-published author, and her future plans.

Who are your favorite authors and how have they influenced you as a writer?

I have more favorite stories than authors, but the writers I come back to include Roald Dahl, Megan McCafferty, Nick Hornby, Neil Gaiman, Shel Silverstein, Edith Blyton, J.K. Rowliing, Pablo Neruda, and Shakespeare. I’ve always loved fiction novels and the way they take you worlds away from your own. I like to think that these authors have influenced me in the way that they bring glimmers of humor and lightheartedness in the things they write (with the exception maybe of Neruda), but I think what anyone who reads really takes away is vocabulary and tone. With Shakespeare and Neruda particularly, I used to pattern my poetry after theirs when I was trying to find my own voice as a poet.

When did you start writing poetry that made you realize, “hey, I wanna keep doing this”?

I’ve always enjoyed writing and creating my own little books, but I think the turning point was in grade school when we were tasked to make a small booklet of limericks as an assignment and I was intimidated by how many I had to come up with. My dad helped me out and showed me how the restrictions to the form of a poem are helpful in the way that they give you a precise number of options as to which direction you want to take your poetry. Since then, rhyming came easy, and I took to it easily when I needed a form of expression.

Writing music, fiction, or poetry is like baring your soul to the world. How does it feel to have a part of who you are out there in the hands of others to read and discover?

It was intimidating at first, because this was a side of me I’ve always kept to myself, but the response has been positive so far, and it’s actually nice to reveal myself through something written then having to talk it out.

What kinds of books would you want to release in the future?

I’ve been working on a novel for a couple years now (and unsuccessfully tried to finish it during a NaNoWriMo a few years back) so I hope to be able to finish and publish that as well some time soon.

Have you ever considered publishing the traditional route?

I have considered publishing the traditional route, but my work, I felt, was more personal this time, so going at it through self-publishing seemed more appropriate.

Tell us about your journey as a self-published writer. What was the process like? What are the difficulties you face?

Self-publishing is difficult because you are only accountable to yourself, so you need to be highly self-motivated. You also need to publish through a corporation if you want to register in the national library and get your ISBN (so you can sell in bookstores), so you either need to find a corporation to sponsor your publication, or work with a self-publishing company like I did. Another thing is that all the risk is on your end as the publisher. You spend for the printing, marketing, etc. BUT, if you sell everything okay, you should reap great profit as well.

Some of the poems I’ve written are actually the basis for Moonwlk songs, so I don’t consider it very different. The only difference, I think, is that when I’m working with Nick, the inspiration and imagery doesn’t come solely from me. There is a discussion, and Nick is free to play around with the words and phrases that I come up with too. So, yes. I consider songs poetry. In fact, I think a lot of songwriters are the best poets I know.

What was it like working with several visual artists?

It was encouraging to work with a variety of artists because of the positive response that they had toward my work. That they just agreed to work with me at all was a great affirmation that what I had written resonated with someone. It was also interesting to see how their interpretation differed from my own. I’m not a visual artist – or at least I’m not as good as those who worked on the art in my book – but I did have an idea of what my poetry looked like, and it was good to see something different from what I had envisioned.

Keep on writing. Be attached and emotional, but be willing to detach and ask yourself, if someone else had written this, would I read it? Accept criticism with an open mind and ear. Don’t be afraid to pattern your work after someone great. That’s not to say plagiarize, but DO note what you admire and learn from that. That you’re afraid to share your work might be a good indication that it is emotional enough to be something amazing. Be brave. Get it out there. And again, keep writing, keep writing, keep writing. Also: read, read, read.

Where can our readers pick up a copy of your book?

Right now, all copies are only available through myself, but I hope to have copies up in Central Bookstore soon, and also (hopefully) some main bookstores.